Writing was my Greatest Remedy

From an early age, writing has been a tremendous outlet, a form of reflection and a way to continue to believe that there was more to life than the chaos and struggles of the moment.

I was seven years old when my mother told me about an article in the newspaper that spoke about a writing competition organized by the Dutch Children’s Book Week. I was immediately interested to listen to what she was saying, because even at that age I was already passionate about writing. Especially the writing of short stories that first took shape through my rich, childlike fantasy, and which I then put on paper with neatly written letters in children’s language. I wrote them down with a fountain pen – carefully, so I wouldn’t make any smudges – and with a colored pencil I gave all the capital letters some extra attention. We were on holiday in Reek, on a great-aunt’s farm, where my days were filled with feeding the chickens, splashing around in the mud with my boots in the yard, and fantasizing about climbing into the big cherry trees in the neighbor’s garden, fantasizing what they would look like in full bloom. 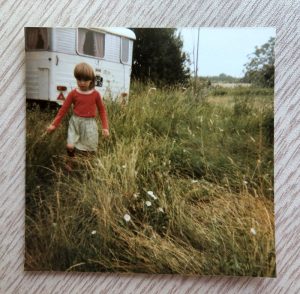 I immediately decided that I wanted to enter the Children’s Book Week story writing competition, and my mother gave me a small, dark brown ring binder with lined writing paper. It was a valuable gift not very common within our meager household income, and it was the beginning of my infatuation with folders, notebooks, notepads, and diaries.

I ended up submitting twelve short stories for the competition, forgetting the world as I carefully wrote them down on the bright white paper. My mother mailed them into the world in a nice, large envelope. Would someone actually receive that envelope? Would anyone actually read my stories? – I wondered every day. School had already started, and I was still waiting for a sign.

“Minou, there’s mail for you from the Children’s Book Week!” My mother’s redeeming words echoed through my head. “We would like to invite you to attend the award ceremonies …”, I felt like a queen!

I remember how nervous I was between all those big children with their parents, a whole space full of tension about who was going to win something. The 3rd prize … the 2nd prize … the 1st prize … Although I secretly hoped for it, I did not win any prize.

“And we also have a special prize today, for the youngest contestant who submitted no less than twelve stories. Minou Hexspoor!” All the big children and their parents started clapping and my mother gently nudged me to the front of the room “go ahead, they want to give you a present”. I was glowing with pride but was terrified for being at the center of attention, so my mother came along. An English-speaking man whose name was Tony Ross shook my hand and gave me a Dutch translation of his book after writing my name and a personal message in it. That summer was the beginning of a lifelong relationship with writing.

I was twelve when I submitted my next writing: The World Day for Children and Poetry which was held on March 21, 1992. The special day was organized for the first time that year in the Netherlands by Mieke Westbroek (a Dutch writer) in collaboration with Unicef ​​International. The World Day for Children and Poetry was already a tradition in many countries, set up by Unicef ​​in 1976, and now the Netherlands had joined, so children from all over the country could subm 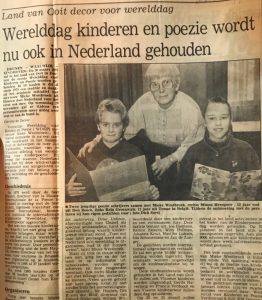 it their poems. I did, and again I received mail, this time with an invitation to come and recite my poem as a contestant. I wrote the poem down a hundred times in my notebook, afraid that I wouldn’t remember the words, afraid I would make a mistake. With the words burned into my mind, I stepped forward and recited my poem while looking at my mother all the time to make sure I stayed focused. The next day I proudly showed up in the newspaper next to another contestant and Mieke Westbroek.

The book by Tony Ross, my notebooks full of child-writings, and the newspaper article are stored in a wooden crate in the Netherlands, in my old bedroom in my father’s attic, together with a stuffed dog that is falling apart, a recorder and childhood photos.

The poem I wrote and recited was named Sunset, a mixture of truth and thought reflected on by a girl sitting on the beach watching the sun go down, blending away the illusion of the separation between reality and imagination. I wrote that poem during very turbulent years in our family. And now, 29 years later, I still remember the words and a feeling of melancholy overcomes me. During my teenage years, I often fled into a world of fantasy because the emotional adult world was too chaotic and unpredictable. My father’s emotional well-being fell on my young shoulders because he couldn’t overcome the divorce from my mother, while my mother went through a storm of change so quickly in her quest of finding herself, that I couldn’t keep up . Also, a new man, then still young and inexperienced, entered our lives as my mother’s new partner. Everyone was fighting with everyone as I felt trapped in my inability to maintain harmony between the people I loved so dearly. I was emotionally drowning due to a lack of boundaries and security, and the needed attention for my well-being disappeared inside the cracks of life. And even then, I wrote always and everywhere, in notebooks, on tablecloths and napkins, in schoolbooks and on the doors of my bedroom.

Healing Wounds of the Past

During my childhood I wrote from within my fantasy and innocence while my mother spun a cocoon of love around me in which I lived in a world of elves, gnomes and princesses in the midst of a protracted marriage crisis between my parents. During my early teens I wrote out of a desire to bring that world of fantasy to life in the chaos of my childhood, about the deep desire to belong somewhere, not to feel rejected, just to be like everyone else among people like me. During my late teenage years, I wrote about the behind-the-scenes pain of the relationship with my first real love. The poems of that time are still written in white ink on the doors of my bedroom: Desperate words of longing for romantic love, but also a cry for safety and security in a world over which I had completely lost control. Three years later, I brought the greatest happiness of my life into this world: my son, as I began my journey as an adult woman. 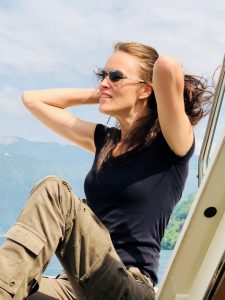 Looking back, the lack of boundaries spins through my life like a connecting thread, and I ‘m seeing how the fear of rejection and the deep need to belong somewhere were the underlying cause of many difficult situations. I was so afraid of being rejected that it often seemed as if I would give my soul to just be belong somewhere unconditionally. Looking back, I sometimes think that life back then seems like a different life, as if I am a completely different person now, after I have undone all my wounds of their stitches and they have been taken care of and healed.

A month ago I took the decision: I’m going to start writing a book. The idea grew and blossomed in my heart and mind over the years, looking back on a life that during the first half was characterized by an enormous absence of healthy boundaries: as from such a young age I learned to hear, see and feel the feelings and needs of others , and to respond to it became a second nature. Wondering what I really needed myself, let alone what I really wanted, thought and felt, I only learned to recognize during the second half of my life. That led to a special and deep inner journey, a search for where my limits and boundaries are, how I could shape my life based on self-love and self-care, how I could make choices based on what I really wanted with the life given to me. During that journey I wrote stories and poems, but also a thesis about the identity struggles of mothers who lost custody of their children. I dedicated my thesis to my mother with whom I have come a long way and who is now closer to me than ever. I also published a collection of sensual poems during a period in which I dealt with and healed from the sexual abuse that took place during my teenage years, a collection of words that became an ode to the freedom of expression of my own sexuality, Acres of Love. Writing was and remained to be my greatest remedy.

It turned out to be a journey that took place not only personally but also professionally: first within youth care, then when I worked in international humanitarian relief, and finally within my own company, helping people all over the world to reconnect with themselves and to develop healthy boundaries so they too can and dare to live the life they long for deep inside. And that’s what my book will be about. It’s exciting and scary, writing a book that is so closely linked to my own story.

When The World Is Quiet

My story is not unique. It is unique because it is my story, but of course we all know those feelings: the fear of not being good enough, wanting to feel at home somewhere, wanting to be seen, needing a break to take a breath, fear of rejection, fear of confrontation or losing control. But how often do we accept certain behaviors around us, situations that we find ourselves in, that are not healthy for us, that take advantage of us, consume us or even poison our energy? The greatest gift we can give ourselves is the realization that real change will never just knock on the door. Change announces itself when we are ready to take on the responsibility to love ourselves enough, to grant ourselves the life we ​​desire, to be willing to pay the short-term price in order to be able to enjoy long-term happiness.

Seven-year-old Little Minou knew what it was all about: cherry blossoms, dancing in the mud in princess dresses and boots, and being free from what the world thinks. Because dear God, opinions are shared by everyone about everything. But if the world is quiet for a moment, and you listen very carefully, what do you really hear?