Violence, Self Love and Finding a Way Out

“It’s always the same with you bitches!” I abruptly stopped stirring while the spaghetti slowly slid off the spoon back into the pan. I felt nauseous and a bitter taste filled my mouth. “Fuck this shit!”, he shouted as I heard him walk down the hall and out of the door, which slammed behind him. My head started spinning, although I didn’t know exactly about what: a kind of turbulent emptiness – a tidal wave of aimless panic. Although he regularly had these kinds of outbursts, it was always unpredictable where or to what they would lead.

Young and Hopelessly in Love

The first time he unexpectedly lost his temper was four years earlier, a few months after we met. I was sixteen years old and he was in his early twenties.We were both smokers at the time, and while lounging on the couch and watching the news, I lit a cigarette. “Put that cigarette off,” he said. I laughed out loud, thinking he was joking. “Put it off. You just smoked one! “. I looked at him in disbelief. “Are you seriously telling me to put off my cigarette?” His eyes challenged me. Put it off, now!” A wave of resistance rose up from my toes as I got up from the couch: “that’s up to me to decide, not you.” His fist came towards me so fast that I couldn’t avoid a collision and it slammed into my thigh. I still remember the utter disbelief that came over me and how my brain split between fear and amazement.

It was the first of many outbursts, mostly emotional and psychological, and sometimes physical, and they seemed to turn against me most of the time as if his anger needed a subject in order to be fully expressed. The eruptions often came with his unannounced departure leaving me in uncertainty, waiting if 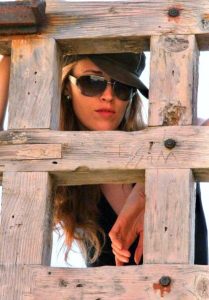 and when he would return. Sometimes that was a few hours later, high on marijuana or beaten by a gambling machine that had consumed our last bit of money. Sometimes it was a week later and I had no idea where he was or what he was doing for days. I would collapse completely, unable to eat, sleep or even think clearly. I really believed he was all I had in my life and I was terrified of losing him.

As the door slammed behind him, my then six-month-old son started crying and I closed my eyes to collect myself. At that moment an image came to my mind as if it were a downloaded video in my head: I saw a balance with the weight of my ‘love’ for him on one side and my strength on the other, and in that moment I knew that when the day would come that my strength outweighed my “love,” I would find the courage to leave. Almost another year would pass before that moment came. A total of five turbulent years with the first man I loved. Five years in which I slowly morphed into a scared, exhausted, lost young woman who was just trying to find ways to avoid unpredictable outbursts, who believed that if she gave him enough, took care of him enough, he would change and become a loving partner. So young and hopelessly in love.

Now, more than twenty years later, I sometimes think back of that girl with feelings of melancholy and surprise. Why did it come to the point that I allowed myself to be treated like this in this relationship for five years? Five years during which I never dared to stand up for myself, afraid of consequences. Five years during which I didn’t leave because I believed I loved him more than anything and that one day he would really change. It is the classic picture of so many women (and an increasing number of men) who become trapped in a vicious cycle of fear, violence and a deep lack of self-love; a luxury that one often cannot afford in a world build on fear.

But of course, reality is always more complex than a black and white perspective. He wasn’t just someone who had outbursts and terrified me. He was also a special person, someone who connected with youth on the streets in our neighborhood and organized football tournaments with them. He knew what these boys’ lives looked like. On good days, he cooked rice with chicken and spinach, lit up our living room with green and blue candles and lovingly massaged my feet while we watched TV. I knew there was someone else behind that thick armor he had built up during his childhood. The outside world often tends to view complicated dynamics from a simple perspective; he’s an asshole, why don’t you just leave? But it was not that simple. I saw so much more than that. I saw the pain of a young man’s life and why he was the way he was. I knew the struggles behind it, his story. The family traumas, the journey that also brought him to where he was today. He too was looking for a better life, trying to break free from the past that kept sucking him back in. It was a heavy weight on my young shoulders.

What eventually changed everything is that I could no longer make myself believe that his pain was a justification for hurting me. I could no longer take responsibility for what he couldn’t solve with himself. I had to find my own answers about myself, my own past, my story and my own future, and not in the least that of my son. And doing that was only possible by loving myself enough to let my partner go, hoping that he would find healing from what tore him apart so vigorously inside, and that kept coming out like a tornado of victimization and aggression.

Ten months after I saw that balance in my imagination in the kitchen, the weight of my strength finally outweighed the weight of my love, and I left. Without my stuff, with my son in his stroller and a bag of clothes on my shoulder. It became one of the most crucial decisions of my life, although I didn’t realize it at the time. The first few weeks I did little more than sleep (sometimes more than seventeen hours a day) and eat (I had lost a lot of weight and weighed only 47 kilograms, with a height of 1.82 cm), safely in another city at a friend’s home, for which I am forever grateful.

One memory from that time has stayed with me in particular: I was playing with my son on the floor, he one year old and I twenty-one, and all of a sudden we both just had to laugh uncontrollably. We rolled across the floor together and just laughed and laughed; tears were streaming down my cheeks and I pressed him against me as he put his little arms around my neck. I felt a strength and vigor bubble up inside of me that I had never felt before. During the same period another event took place that also became a defining moment: we went on vacation to visit my mother for the first time after she had moved to Norway a few months earlier. I stepped onto an airplane for the first time and it was the start of a life full of special journeys; inner and worldly ones.

A Fireball of Desire

Now, of course, it would be nice if this story continued with a prince who kissed me and that from there on everything was a fairytale. But like everything else in this beautifully complex human world, this was not a Disney movie. The years that followed, the relationships that followed, the special people I connected with and whose lives connected with me, were all part of my journey in search of myself, as I was part of theirs. Fortunately, I quickly realized one thing: the influence of my thoughts. I began to see my thoughts as indicators for the future rather than a prison of the past. And the more I managed to do that, the more I was able to shape my life from within myself, from who I really wanted to be and what I wanted to create in it. I found out that I had big dreams!

The young woman of the past, who dropped out of high school when she was sixteen, would have laughed if I had told her what her life would be like twenty years later. What she would have accomplished and achieved. How much she would learn and study, the incredible work she would do. How strong she would be and how much she would be loved. How her son would grow into a special and strong young man. How she would set up her own business to support others in their lives on their way to a life of joy and happiness. How much of the world she would see… 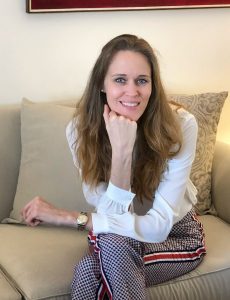 Yet still I want to say it to her, and to all the other women who are in the same boat and for whom the darkness of fear outweighs the light of self-love. Because no matter how dark the nights, laced with question marks about your own right to exist, enveloped in the absence of a way out, there is always light beyond the horizon of fear. And though that light is no more than a tiny star in a dark sky, look at it and let it grow quietly within you. Because one day the day will come when that little star becomes a volcano, a burning fireball of desire, of longing for liberation, love and self-realization. And when that day comes, the world will be at your feet.